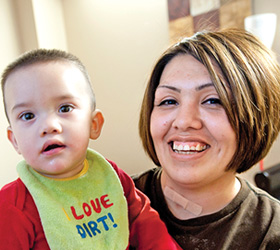 Angela, the single mother of a teenage boy, was seven months pregnant, unemployed, falling behind on bills, and being abused by her boyfriend.

“I honestly lived in fear of our lives daily,” Angela says. Then things got even worse: Her teen son was diagnosed with a brain tumor. Frantic, Angela turned to The Salvation Army.

“I heard they help people in my situation,” she says. “When I was approved for assistance, I just cried and cried.”

“I Can’t Believe All the Love and Support”

Her son had brain surgery, and he’s now doing well. Her baby boy is fine. With Angela’s part-time job and continued help from The Salvation Army, they’re living on their own.

“I can’t believe all the love and support we got from The Salvation Army,” she says. “Thanks to them, I felt like new breath was blown into me, and it helped me get over the hurdles. When someone cares and understands and doesn’t judge you, it makes all the difference.

“It’s hard to believe that so much good can come out of all the sad things that happened to us. I don’t know how to express my feelings of gratitude to The Salvation Army. They showed true godly love to me and my children.”