Failure No More: How Your Support Transformed Tony's Life 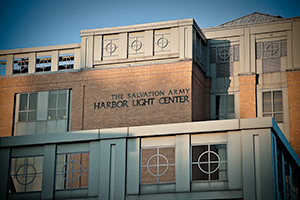 "If anybody would ask me how to get their life back on track, I'd say God and The Salvation Army."
Those are the words that Tony speaks from the heart when you ask him about The Salvation Army. He's also speaking from experience.

Tony's had a hard life. He was just five years old when his father was killed. Tony was devastated and confused. His mom and grandmother were left with the task of raising the kids on their own. Later, his brother was killed too, and Tony was shattered.

During his teen years, Tony became more and more rebellious. He started smoking marijuana, drinking, and using drugs. When he got into trouble at school or when he felt sad, he would go and talk with his grandmother, the one person he relied on more than anyone else. She'd tell him that God would provide and show him the way. As a child, Tony believed it, but as he grew into his teenage years, he rejected it. Soon, even the advice of his grandmother began to fall on deaf ears.
Tony was acting out more and more, getting into trouble, and defying everyone in his path. He was headed down a road of addiction and crime.

"I was out in the streets," he said, "walking around, sleeping wherever, doing whatever. I didn't care about nothing or nobody."

After years of homelessness, things only got worse. "I felt like a failure," Tony said. "So much of my life was wrecked."
But, thankfully, all that changed when he came to The Salvation Army of Greater Cleveland. Through your generous support, we were there for him. Tony began living at the Harbor Light Complex, a shelter for the homeless. And he took part in programs to help him conquer his addictions and get his life back together.

Through The Salvation Army, God's love, and the generosity of donors like you, that's exactly what he's doing. Tony is transforming his life.

He's been clean and sober for two years now. He has worked as an elevator operator in the Harbor Light building, and he has volunteered to distribute food to needy children in Cleveland's poorest neighborhoods. Things are looking up.