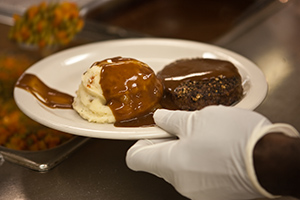 Paul and Tabitha never had it easy. He was working two jobs. She was working outside the home and taking care of her family. They were just barely making ends meet.

Then their luck went from bad to worse. Paul lost his first job at a local school district. Then, shortly after, he lost his second job as a pantry cook at a neighborhood restaurant. In a flash, panic set in.

Even though Tabitha was still working, her pay wasn't enough to cover groceries for the family and diapers for the baby. Before long, they couldn't pay their rent, and they were evicted.

Scrambling for a solution, Paul began living in his van, while Tabitha took the kids and stayed with her stepmother. This went on for almost three months. Every day, Paul got up at 4:00 a.m., picked Tabitha up and drove her to work, and watched the kids while he tried to find a job. It was a grueling routine that took its toll.

One morning, Paul fell asleep at the wheel and crashed into another car. Luckily, no one was seriously hurt, but it was a red flag. They'd hit bottom.

That's when they came to The Salvation Army. Thanks to your generous support, we were able to help this struggling family.

First, we got them into the Harbor Light Complex, our shelter for families. There, they had a roof over their heads, hot meals, and clean clothes.

"I'm grateful for The Salvation Army," Tabitha said. "They give food and shelter to people who really need it. That made all the difference to us. It helped keep my family together."

With their immediate needs met, Paul and Tabitha were ready to begin working toward self-sufficiency. They were assigned a caseworker, and they meet once a week with her to follow a plan to get their lives back on track. It's working. Before they came to The Salvation Army, they were worried for their future. Now they have renewed hope and confidence that they'll stay strong as a family.

"It's the stability," Paul said. "When you have kids, it's important for them to have someplace they can call home. The Salvation Army has given us that, and I can see the difference it's made for our kids. I know we'll make it now."