What is an Officer?

Operations of The Salvation Army are supervised by trained, commissioned officers. They proclaim the gospel and serve as administrators, teachers, social workers, counselors, youth leaders, and musicians.

These men and women have dedicated their lives, skills, and service completely to God. Lay members who subscribe to the doctrines of The Salvation Army are called soldiers. Along with officers, they are known as Salvationists.

After two successful years of training, cadets are commissioned as lieutenants, ordained as ministers, and assigned to active duty while continuing their education. Lieutenants are required to devote five years to additional studies.

Numerous advanced training courses are available for officers wishing to specialize in a particular discipline. Institutes, seminars, and conferences have been established to ensure that officers are informed of new and innovative programs and developments.

Promotion is based on length of service, character, efficiency, capacity for increased responsibility, and devotion to duty. The ranks are lieutenant, captain, major, lieutenant colonel, colonel and commissioner. The international leader holds the rank of general and is selected by a high council of active-duty commissioner and territorial commanders.

Salvation Army officers must devote full time to Army work. An officer who marries must marry another Salvation Army officer or leave his or her officer status. Married captains and majors will individually carry the rank applicable to their own length of service, not that of their spouse. In case of married officers, the conferred ranks of lieutenant colonel, colonel and commissioner will be held jointly. As ordained ministers of the gospel, they are authorized to perform marriage ceremonies, funeral services, and infant dedications. They also provide counseling and consolation to the bereaved.

What is a Soldier?

Lay members who subscribe to the doctrines of The Salvation Army are called soldiers. Along with officers, they are known as Salvationists.

The soldiers of The Salvation Army (wearing blue epaulets), the committed laity, are local citizens in communities throughout the U.S. who give allegiance to the doctrines and disciplines of the Army. There are approximately 450,000 soldiers in the United States.

These soldiers may take on volunteer responsibilities in the congregation or help with The Army's social service outreach. Many soldiers give valuable service in directing and leading youth groups in character-building activities, or by taking part in The Army's musical programs, which teach young people to sing and play an instrument.

As a valuable means of service to the community, soldiers visit the sick and lonely in hospitals, nursing homes, and correctional institutions. Social service programs are enhanced by the commitment of soldiers who often give their time to Army facilities that provide basic food and shelter.

Trained and qualified soldiers are appointed as "local officers." This corresponds to a non-commissioned officer in the armed forces. Other members of the congregation are adherents who participate in church activities but have not signed on as soldiers. Adherents may take on some lay responsibilities, such as teaching Sunday school classes. 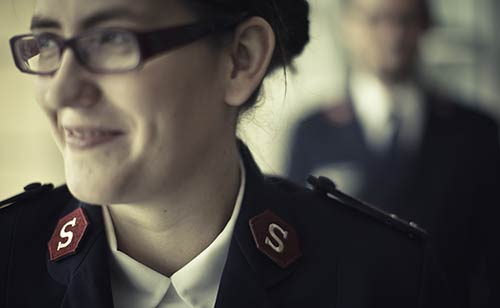