Applications are now closed. Thank you to the 3700 households who applied using our online system. Confirmation emails are now being sent out to those applicants.

Holiday Assistance Registration is available during the following time frames at the locations listed below:

Ottawa County, OH: Residents can pick up an application during business hours at either the Ottawa County Public Library or the Salvation Army in Port Clinton at 1834 E. Perry Street. The application period runs through December 1.

Required documents: 1) Picture ID for all adults in the household; 2) Proof if income for the household (current within 30 days), such as a paystub, proof of unemployment, or an SS/SSI/SSD printout; 3) Proof of address (Must include applicant's name, address and be current within 30 days), such as a utility bill or piece of business mail; 4) Proof of birthdates for all children, such as a birth certificate, 2018 income tax return, or a recent official school record; and 5) if applicable, legal guardianship or custody papers

Kettles are now used in such distant lands as Korea, Japan, and Chile, and in many European countries. Everywhere, public contributions to the kettles enable The Salvation Army to bring the spirit of Christmas to those who would otherwise be forgotten - to homebound seniors, the ill, inmates of jails and other institutions, and those stricken with poverty.

Annually, The Salvation Army in the United States aids more than 6,000,000 people at Thanksgiving and Christmas. Kettles have also changed since the first utilitarian cauldron set-up in San Francisco. Some of the new kettles have such devices as a self-ringing bell and even the ability to donate via credit card. These new technological advances allow The Salvation Army to keep their brand fresh and relevant to a new generation of donors and volunteers, and above all, continue "Doing the Most Good" in their communities


The History of the Red Kettle Campaign 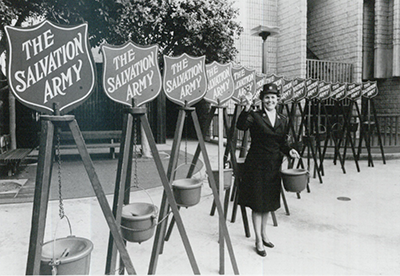 In 1891, Salvation Army Captain Joseph McFee was distraught because so many poor individuals in San Francisco were going hungry. During the holiday season, he resolved to provide a free Christmas dinner for the destitute and poverty-stricken. He only had one major hurdle to overcome -- funding the project.

Where would the money come from, he wondered. He lay awake nights, worrying, thinking, praying about how he could find the funds to fulfill his commitment of feeding 1,000 of the city's poorest individuals on Christmas Day. As he pondered the issue, his thoughts drifted back to his sailor days in Liverpool, England. He remembered how at Stage Landing, where the boats came in, there was a large, iron kettle called "Simpson's Pot" into which passers-by tossed a coin or two to help the poor.

The next day Captain McFee placed a similar pot at the Oakland Ferry Landing at the foot of Market Street. Beside the pot, he placed a sign that read, "Keep the Pot Boiling." He soon had the money to see that the needy people were properly fed at Christmas.

By Christmas, 1895, the kettle was used by 30 Salvation Army Corps in various locations on the West Coast. That year, The Sacramento Bee carried a description of the Army's Christmas activities and mentioned the contributions to street corner kettles. Shortly afterward, two young Salvation Army officers who had been instrumental in the original use of the kettle, William A. McIntyre and N. J. Lewis, were transferred to the East, and took the idea of the Christmas kettle with them.

In 1897, McIntyre prepared his Christmas plans for Boston around the kettle, but his fellow officers refused to cooperate for fear of "making spectacles of themselves." McIntyre took matters into his own hands and along with his wife and his sister, set-up three kettles at the Washington Street thoroughfare in the heart of the city. That year the kettle effort in Boston and other locations nationwide resulted in 150,000 Christmas dinners for the needy.

In 1898, the New York World hailed The Salvation Army kettles as ‘the newest and most novel device for collecting money." The Newspaper also observed, "There is a man in charge to see that contributions are not stolen."

In 1901, kettle contributions in New York City provided funds for the first mammoth sit-down dinner in Madison Square Garden, a custom that continued for many years. Today, the homeless and poor are still invited to share holiday dinners and festivities at hundreds of Salvation Army centers, however, families are given grocery checks so that they can buy and prepare their own dinners at home.